Mafia of Cyprus Operates A Criminal Enterprise In The UK

Mafia of Cyprus Operates A Criminal Enterprise In The UK 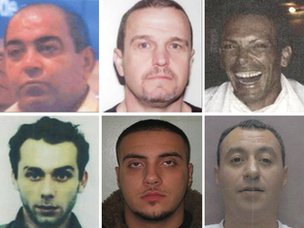 A campaign has been launched to track down some of the UK's most wanted fugitives, thought to be in Cyprus.

The list of eight men and one woman was compiled by the Crimestoppers charity, the UK's Serious Organised Crime Agency (Soca) and the Republic of Cyprus.

One of the men is Martin Evans, 50, from Swansea, who is wanted for drug dealing, theft and fraudulent trading.

It is believed the suspects may be hiding among the large British expat community on the island.

A Crimestoppers spokeswoman said: "Soca intelligence suggests the nine fugitives are currently in, or travel regularly to, the Republic of Cyprus but some may cross into the self-declared Turkish Republic of Northern Cyprus."


Zygos loosely translates as "scales of justice". This operation is in the same mould as similar very effective campaigns in Spain and the Netherlands.

If past experience is anything to go by, some arrests could come within hours of the press launch.

Again experience shows that those accused of child sex offences may feel it is safer to hand themselves in, rather than face exposure to an angry community.

Extradition from the Republic of Cyprus should be a straightforward process using an European Arrest Warrant. But extradition from Turkish-controlled Northern Cyprus may be more problematic.

That was where Asil Nadir hid from British justice - and he only came back to the UK because he wanted to.

Operation Zygos, the campaign to track them down, was launched on Wednesday and is seeking to trace the following fugitives:

Hasan Akarcay, 56, a Turkish Cypriot who is wanted by West Yorkshire Police, over allegations of dealing 27.5lb (12.5kg) of diamorphine, a drug similar to heroin. He has used the aliases Hassan Etem and Ibrahim Etem and is around 5ft 9in (1.75m), stocky with a large paunch.
Paul Lockwood, 41, is wanted by Greater Manchester Police in connection with the rape of a young girl. He is 5ft 6in (1.67m), white with brown eyes and hair.
Timur Mehmet, 39, from Buckinghamshire, is wanted by Her Majesty's Revenue and Customs after being convicted in his absence and jailed for eight years for a £25m tax fraud. He is 5ft 11in (1.8m). He is British Asian.
Costas Sampson, 21, is a Greek Cypriot who is wanted by the Metropolitan Police in connection with the rape of a woman who was attacked in Ruislip, west London. He is 5ft 9in (1.75m) and is known to wear his black hair closely cropped.
Mehmet Salih, 41, a Turkish Cypriot, is wanted by Leicestershire Police on suspicion of dealing in cocaine between December 2010 and November 2011. He has used the alias Aynur Mehmet Salih and is 5ft 6in (1.67m) with a scar near his right eye.
Wayne Smith, 38, was convicted at Birmingham Crown Court of causing the death of a 22-year-old man by dangerous driving. He is 6ft 1in (1.85m) with short, fair hair. Anyone with information should contact West Midlands Police.
Julie Skelding, 40, is Smith's girlfriend and is wanted by West Midlands Police on suspicion of perverting the course of justice. She is 5ft 5in (1.65m) and has a red rose tattoo on her left arm.
Martin Power, 46, is wanted by Scotland Yard for questioning about a conspiracy to defraud mortgage lenders of £7m. He is 5ft 10in (1.77m), and has a scar on his chin.

Crimestoppers founder Lord Ashcroft said: "My hope is that we shall see more success in bringing some of the UK's most wanted fugitives to justice.

"While these suspected criminals will see Cyprus as a safe place to evade law enforcement, my belief is that with the help of the local public and expatriate community these individuals will not be able to escape justice for much longer."
'Harm to communities'

Evans, who went on the run in 2011, is high on the list, according to the charity's head of campaigns.

"He is wanted for transporting, selling class A drugs - cocaine and ecstasy," said Isabel Cross.

Martin Evans, 50, from Swansea, ran a drug-dealing gang between 1999 and 2001, smuggling drugs into Britain and laundering the proceeds by converting cash into foreign currencies and moving it to the Netherlands, where it was used to buy more drugs.

He is also wanted for stealing thousands of pounds of investments made to a company he ran called Ostrich Centre Limited in 1995.

He went on the run after being released from prison on licence in 2011.

He is 5ft 11in to 6ft tall, stocky, has short brown hair that is going grey and blue eyes.

'Failed to return to prison'

"In addition, he has managed to defraud a number of members of the public to the tune of around £100,000. Here is someone that we really think is probably living a life of luxury, probably in Cyprus."

All nine have had European Arrest Warrants issued against them.

Anyone with information is encouraged to come forward regardless of which part of the island the suspect is in.

"Soca and our partners are determined to ensure life on the run is intolerable for them and that they are returned to face justice in the UK."

Crimestoppers has set up a web page dedicated to the campaign.

The charity has run similar schemes, including in Spain, where Operation Captura, launched in October 2006, led to 49 out of 65 suspects being arrested.